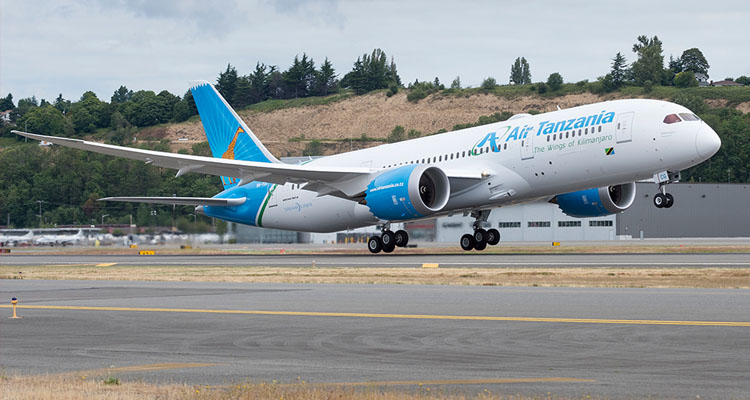 The aircraft's delivery will signal a major shift in Tanzania's aviation sector that will see the national career start operating intercontinental flights later this September, with a maiden flight to Mumbai.

This is a major boost to the fortunes of the carrier, revived barely two years ago, as it seeks to play a bigger role in the regional aviation market dominated by Ethiopia, Kenya and Rwanda.

Last week, the airline's commercial and business development director Patrick Ndekana said that the Dreamliner aircraft will fly to Mumbai thrice a week starting September, its first route outside the continent.

In March, Air Tanzania announced that the 787 Dreamliner will be its flagship as it renews and grows its fleet.

Two years ago Tanzania decided to develop a specific programme for revamping its national carrier which included purchasing of six new aircraft between 2016 and 2018, paying off debts, provision of startup capital, improvement and modernisation of business systems.

Mr Matindi said that the Bombardier C300s will be used to open up to six regional routes in southern and West Africa as the airline tries to capture a share of these markets.

“We are looking at South Africa, Zambia and Zimbabwe and in the future expanding to West Africa with Ghana and Nigeria. We will however use the Dreamliner for intercontinental routes to China and India initially, followed by Europe in the second phase. We are already in talks with Boeing and the government to have a second delivery of the same aircraft in the near future,” Mr Matindi said.

Air Tanzania is also expecting to undergo the Operational Safety Audit (IOSA) certification before the end of July, which will enable it enter into commercial partnerships with other operators as it seeks to grow its revenue via code share agreements.

The International Air Transport Association's IOSA is an evaluation system designed to test the operational management and control systems of an airline, putting it at par with the international aviation standards.

“We already have a strong business plan and given that we are a great tourism destination, we believe that we will have the right mix of passenger numbers and capacity to support this plan,” Mr Matindi said.

On Tanzania’s domestic routes, Air Tanzania will compete with Kenya Airways which partly owns Precision Air and the troubled Fastjet.